Developing a Successful Technique for Intraoral Scanning of Soft Tissue Scanning soft tissue with an intraoral scanner (IOS) is a contentious issue right now amongst dental professionals. Understandably, some in dentistry may feel that way primarily because scanning soft tissue has historically been challenging. The oral environment is, well, pink. There is also the past misperception within the dental industry that scanners have difficulty picking up soft tissue due to the liquid factor, making things shiny, reflective, and too much tissue movement. However, technology has changed the ability of the IOS in the past few years. There is a nuance to a successful scanning technique that can achieve the best scans possible. Here are some tips for overcoming difficult scanning situations involving soft tissue.

A Small Camera With Big Capabilities

When considering the fundamentals of what an intraoral scanner is and what it is accomplishing, an IOS is a small camera with a high level of visual precision. The device can perceive a half-inch by half-inch of space. However, what is astounding is that this tiny camera is capturing microns of accuracy in a complex photo environment. It must deal with humidity, salivary flow, and the constant motion of soft tissue, like the tongue, which changes shape.

There is also the issue of connections between the cheek and gums, which appeared uniform in early IOS iterations. Because there was no stable point that a scanner could reliably go through and capture on top of all the other tissues, the scanner could not figure out what it was looking at. That is why so many dental professionals were hesitant to move away from the old style of alginate impression because no one wants to fight moving tissue. If one were to actively scan something solid, such as a tooth connected to gingiva tissue, there is no issue of precision and trueness in the scan because there is no movement. Still, there are situations where a large amount of soft tissue data is needed, such as in edentulous cases.

As the technology of the scanner and the associated software has advanced, the thoroughness of scans has dramatically improved. This advancement is mainly due to what is known as “smart filtering.” Devices with smart filtering can identify the difference between hard dentition elements, teeth, and soft tissue. Using the scanner properly and engaging a selected filter can effectively differentiate and remove unnecessary tissue from the scan data based on movement. Some scanners have multiple option levels to demonstrate how the filtered tissue is different from one another. Additionally, in post-scan observations, unnecessary soft tissue can be similarly removed from scans as an item can be removed from a digital photo.

IOS Technology and the Learning Curve

While the technology may be intimidating, there are things to consider. First, training and education are always recommended with a new IOS device. There is the type of device and the manufacturer’s suggested positioning when performing scans. There are also issues of how to view monitors, handling the device, hand-eye coordination, and of course, retraction and soft tissue isolation.

The digital capabilities of intraoral scans can now be used to fabricate almost any dental appliance or prosthetic device. Simply put, anything that can be created from alginate or polyethers, polyvinyl siloxanes, and hybrids can make a digital impression with an IOS. Everything from fixed crowns, partial dentures, bridges, complete dentures, implants, and various types of prosthesis.

In the case of these other product lines, especially certain types of removable partial dentures (e.g., a good cast metal partial), the posterior support may rest or clasp on the mesial and distal of occlusal natural teeth and is not a tissue-borne appliance; an IOS digital impression works perfectly. Regarding full dentures, where the denture base rests on the mesial and distal and are supported by that soft tissue, there is no hindrance to the practitioner’s workflow.

It should be noted that the cases with the most difficulties scanning using an IOS device are with the lower arch. While the upper maxillary scans quite well because of the texture on the roof of the mouth, there is evidence that intraoral scans are beginning to surpass other forms of impressions without the need for revisits to adjust or make another impression.

Tips and Techniques to Learn

Here are a few techniques to take under advisement to assist in soft tissue scans.

There is a learning curve to every new technology. The more it is used, the technique will improve. Some devices can be mastered with a small number of scans. Yes, practice does help. In time you will discover the nuances to be successful and it is less time than recasting for mistakes. Lastly, the benefits outweigh the intimidation of learning something new. High-resolution scans can be performed in minutes, giving patients less time in the chair and less time chairside for the dentist.

Not every intraoral scanner is the same. Some manufacturers have nuances to their usage and require various scan path strategies. In other words, they suggest a particular direction to operate the wand to acquire better scan visibility. Also, be forewarned that not all scanners are equal in capability. There are brands that involve a significant sum of calculations and software usage to make the scan accurate. There are also excellent scanners but they are difficult to use and have less sophisticated software.

Find the product with the optimal cross-functional device and software to ensure that scans have the best resolution and data possible. The two should work symbiotically. In the end, practice and technique will improve intraoral scanning abilities and your digital dentistry. If you’re a Dandy customer, rest assured that many errors are caught by our live scan review team, reducing the number of callbacks. In the end, find confidence when the IOS device, software, and your technique become synchronous, improving your workflows and your overall dental practice. 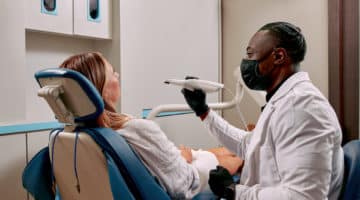