How Dr. Sheikh better serves his community with Dandy Dandy takes great pride in what we create. Our products and technology are something we are incredibly excited about. Being seen as an innovator and disruptor in the over 100-year-old dental industry that has been “doing it the same way” for so long is a badge of courage for us. And, even more, knowing that thousands of dentists and practice owners trust us enough to use the Dandy intraoral scanner and software daily is a sign we are succeeding. Then, there are immaculate labs fabricating teeth, partials, crowns, and full dentures with stellar quality. The fact that our low level of readjustments reinforces our dedication to manufacturing the best prosthetics in the field. However, in comparison to the good deeds of our dentists, our accomplishments pale in comparison.

We at Dandy are most proud of the relationships that we foster with dental professionals who depend on us to take their patient experience to an elite level. Our customers are some of the finest human beings who spend much of their time offering the best service to their patients and giving back to their communities. When we can contribute by assisting dentists who need higher levels of efficiency to make time for all they need to accomplish, we feel part of all the good they do. That especially holds true for Dr. Moeen H. Sheikh, DDS, and his practice.

Being a member of a powerful team.

Dr. Sheikh believes that his greatest asset is his exceptional staff. Their goal from the first appointment is to give the patient a smile through treatment, and by lifting up their disposition with the care they receive. At a recent conference, Dandy caught up with two of Dr. Sheikh’s employees—Pilar and Kayla. It was evident why they were a part of Dr. Sheikh’s team. Their vivaciousness was apparent.

Dr. Sheik’s dental assistants and hygienists are all licensed professionals. They keep up their skills and stay on the cutting edge of dentistry. They also pride themselves on their communication abilities. Most of all, they enjoy what they are doing, which is reflected in the patient experience they create. Their high standards and belief in quality and integrity help achieve superb outcomes. They are also highly motivated to provide the best for patients whom Dr. Sheikh sees as his family.

Pilar has been with Dr. Sheikh for 30 years since his private practice started. She has seen his progress every day. Pilar knows that Dr. Sheikh and his team try their hardest to give their patients elite service. That was one of the reasons he chose to transform the practice into a digital dental office. According to Pilar, it started over six months ago when Dr. Sheikh partnered with Dandy and used their intraoral scanner. Before the transition, they were making traditional VPS impressions. However, they found that the turnaround was slow with other labs. But not with Dandy.

“The turnaround time was over two weeks sometimes [with other labs],” Pilar began. “Right now with Dandy, surprisingly, we’re getting it in a week’s time—even though it’s [the Portal] telling us a little bit longer. But within a week, we already have the cases. I just love that because a lot of the patients don’t want to sit and wait. They don’t like to wear their temporaries. Even as many times as you tell them, ‘You’re good,’ they want to get it done, and they want to be confident knowing that their teeth are good.”

She went on to explain that the intraoral scanner has become a favorite of Dr. Sheikh. In fact, he performs 90% of the scanning, but Pilar said that “it’s fun to watch.” And their workflows? Pilar said, “We’ve seen turnaround time is faster, and appointment times are faster.” This new level of speed is partly due to the training Dr. Sheikh and the staff received from Dandy.

“Overall, everything is awesome about the training team and the customer service. This is why we’re so happy with Dandy,” Pilar stated emphatically.

As for the fit of the pieces, Pilar explained that this issue had not been a problem for their practice.

“Everything just fits, you know, with limited adjustments, which in the past that’s the biggest chair time. Right now, especially with the partials, pop them on, and see ya! And nobody has come back to say, ‘Oh, this hurts.’”

Pilar further shared that they’ve had a couple of readjustment cases, usually found in “older folks.” “The older folks are already used to their dentures that they’ve had for 20 years. So. when they get a new one in, “Oh, this hurts or that hurts.” Anybody who’s new to dentures is fine and dandy. Dandy sells itself. No pun intended.”

Service to the community at large.

In normal circumstances, Dandy would be pleased by the feedback from Dr. Sheikh’s staff. However, there is more to his practice that many might not know about. Dr. Sheikh believes in serving his community and giving back through his time and talent.

Dr. Sheikh has worked for the Department of Health for 20 years as a school dentist. He is also an active Head Start/Early Childhood Development Center Health Advisory Committee member. But what caught Dandy’s attention was the chairside treatment of special needs children, including those on the autistic spectrum.

The doctor and his team are specially trained to serve and provide dental healthcare for the special needs community. But for autism, which affects as many as one in 88 children, they need a unique understanding of how autistic children communicate, operate, and form bonds, or the lack thereof. Dr. Sheikh’s education and training have prepared him to understand that a child may appear detached from their surroundings or aloof. There is also the issue of coexisting conditions, like epilepsy and other disabilities. The complex disorder is challenging to comprehend. The autistic child may have the typical fears associated with strangers. Yet, with autism, children are not comfortable with the unknown.

Unfamiliar sounds, sensations, bright lights, and tastes complicate a difficult situation. Dr. Sheik and his team seek to make the child comfortable by working with parents to ensure that visiting the dentist is not so traumatic for autistic patients. That is incredible to an already long list of accomplishments.

It is no surprise that Dr. Sheikh’s work has earned him acclaim. He was honored for his support of the Sunset Park Head Start “My Hero and Me” Fathers’ Initiative Program. He also received a City Proclamation in June 2010 for his dedication to the community. While partnering with Dr. Sheikh and the team is a badge of glory unto itself, Dandy knows his additional work with the community and special needs children is a privilege. We are deeply honored to have our tools and technology be a part of any practice that is as selfless and centered on the patient “human” experience as Dr. Sheikh.

Pilar left us with some words of wisdom. “Just keep doing what you’re doing, especially with customer service. We are looking forward to learning more. And, you know, just when I’m on that phone and somebody picks up on the other end, it’s awesome. You guys pick up so fast.”

If you have similar needs or want to learn more about the “Dandy Effect” on digital dentistry transformation, contact us for a demonstration and have all your questions answered. 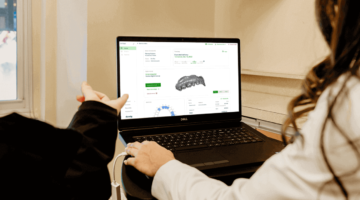 Join thousands of dentists transitioning to digital dentistry
Thanks for your interest!

We send emails every Tuesday. Stay tuned to get the first one!